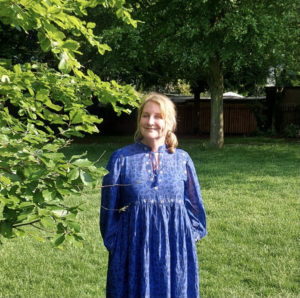 I always pretend that I fell into writing by accident, but the fact is, I’ve been trying to write pretty much from the very beginning.

It started with the stories I used to give my parents every year as Christmas presents. These tales which were carefully inscribed into exercise books, often featured misunderstood children, sinister figures loitering in woods and dramatic deaths. I wasn’t particularly good at anything as a child, but the pleasure and pride with which these scrappy stories were received made me see that perhaps putting words together was something I might be able to do. When I was 13 I ‘published’ my first work. My English teacher sent a piece I wrote to BBC Radio 4 and it was selected to be read aloud. I still remember the astonishment I felt at hearing my words in someone else’s mouth.

I am the child of a novelist and the sister of two writers. I have seen at first-hand how lonely, frustrating and often thankless the process of writing is. As I became an adult, I decided it wasn’t going to be for me. I worked in a variety of jobs which I mostly loved, particularly a stint as a stage manager of the street performers in Covent Garden in the days when things were not as prescribed as they are now. I learnt about how to prevent the fire eaters from injuring the public and more than I wanted to about juggling.

When I was pregnant with my first child I was persuaded (you will see a theme beginning to emerge here) to enter a competition run by Cosmopolitan Magazine and I won the opportunity to write for the magazine.  At this point in my life my first husband died of a brain tumour at the age of thirty and I was left with a small child and a living to earn, so journalism became something practical that I could do alongside looking after him, but I never felt as if I was a proper writer.

After ten years of writing for magazines I also started working for a homelessness charity. It was the stories about how people ended up on the streets that interested me- the small, incremental steps that any of us might experience that could lead to someone losing everything. I spent most of my time writing about their lives and feeling lucky about my own.

I turned fifty. I had two wonderful sons and a second husband who inexplicably wanted to be with me, but I felt the world was narrowing as my bottom was expanding. My mother happened to switch on a TV programme that Alan Titchmarsh used to present at the exact moment when he was announcing a competition for new novelists. She took it as a sign. She often takes things as signs. ‘You only have to write three chapters,’ she said and continued to say during our fifteen subsequent conversations. I sent the three chapters to keep her quiet. I remember kissing the envelope as I posted it so I must have cared about the outcome more than I was prepared to admit. I was astonished to receive a phone call telling me I had been long listed, and even more shocked to find myself on the show as a semi-finalist. Two weeks later I was sitting on a giant polystyrene book with plastic rain falling from the ceiling hearing that I had won a publishing contract.

Of course, then I had to write the thing. I have since written three more novels and am working on my fifth. I also work for an international disability development organisation. I still feel as if I am trying to write. I think I probably always will.